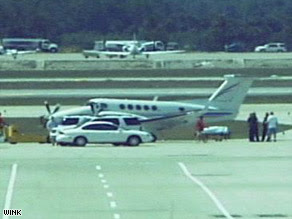 
MIAMI, Florida (CNN) -- It's a nightmarish scenario straight out of the movies: A passenger is forced to land a plane after its pilot becomes incapacitated.

But it became a reality for a passenger on board a plane over Florida on Sunday, and for the air traffic controllers who helped him land safely in what the National Air Traffic Controllers' Association called "an Easter miracle."

The incident began about 1:30 p.m. Sunday. The plane, a Super King Air two-engine turboprop with four passengers on board, was headed to Jackson, Mississippi, from Marco Island, Florida, about 18 miles south of Naples.

The pilot notified controllers that the plane was at 9,000 feet and climbing, said Steve Wallace, Miami Center spokesman for the association. However, a controller at the center tried twice to raise the pilot after that and received no response, Wallace said.

After a moment or two, a different voice came over the radio: that of the passenger, who told air traffic controllers that the pilot was unconscious and they needed help immediately.

The man was a pilot but was certified only in single-engine aircraft and had never flown a King Air, according to the air traffic controllers' association statement. The difference, experts said, is not like driving a different model of car. A turboprop multi-engine, Wallace said, "probably lands at a faster speed than he's ever flown a single-engine plane before."

The man told air traffic controllers it appeared the pilot had died, according to the statement, and he reported that the plane's autopilot was on and the plane was continuing to climb from 10,000 feet.

Two air traffic controllers set about helping him disengage the autopilot as other controllers stepped in to lighten their workload. One of the two was called over to help because of her extensive experience as a pilot and the fact that she is a licensed flight instructor, Wallace said.

Meanwhile, a third controller coordinated the rerouting of all aircraft in the area and transmitted emergency information to Southwest Florida International Airport in Fort Myers, about 35 miles north of Naples.

"Our controller walked him through disengaging the autopilot," stopping the climb and beginning a descent toward Fort Myers, Wallace said.

The controllers then turned the plane over to air traffic controllers at the airport. One of them had called a friend who was certified in the King Air planes for advice.

"When the friend had gotten out his flight checklists, manuals and cockpit layout sheets, he was able to issue instructions through the controller to another controller, who then relayed that information to the passenger flying the plane," the statement said.

"They walked him through flipping the switches, turning the knobs," Wallace said. The passenger landed the plane safely on his first try.

Little information was released Monday on those involved. The plane was carrying a family, said Victoria Moreland, spokeswoman for Southwest Florida International Airport, but the name of the passenger who landed it was not released, as he had told officials he did not want to speak to the media. The family took a commercial flight home later Sunday, Moreland said.

The Federal Aviation Administration has not given any of the involved air traffic controllers permission to speak about the incident, Wallace said. However, the National Air Traffic Controllers Association lauded all of those involved in landing the plane.

"If you were to ask any one of the controllers who worked this even about what happened over the skies of south Florida, they would tell you that it was just a typical day at the office and that it was merely their job," association President Patrick Forrey said in the statement. "However, the actions they all took to save the passengers aboard the flight were beyond heroic."

Moreland and the association said the pilot's death was confirmed after the plane landed. The cause of death was unclear, Moreland said, and the pilot's name was not released.

It's rare for a pilot to suffer a medical emergency during a flight, said Chris Dancy, spokesman for the Frederick, Maryland-based Aircraft Owners and Pilots Association.

The organization issues a yearly summary of accident trends and factors based on National Transportation Safety Board reports involving aircraft of less than 12,500 pounds -- smaller than the King Air involved in Sunday's incident.

According to the most recent report, which covers the year 2007, out of 22 million general aviation flight hours -- or an estimated 15 million to 20 million flights -- only six instances of a pilot's medical incapacitation were reported, he said. In four of those instances, the pilot died.

Aboard larger planes, the number of such occurrences likely is even smaller, he said.

But "that's actually something that pilots are trained to do is, if you need help, remember there's somebody on the other end of the radio who can provide that help," Dancy said. And although landing an unfamiliar aircraft is difficult, the passenger's basic knowledge and experience in flying worked to his advantage, he said.

The plane, built in 1982, is owned by a company called White Equipment Leasing based in Archibald, Louisiana, according to a search of FAA records. Attempts to find contact information for the company were unsuccessful Monday.